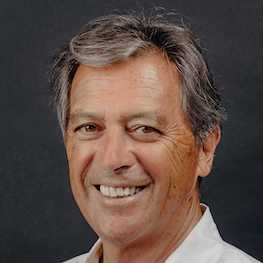 Ian Taylor’s back story is a fascinating journey, from growing up in a house without electricity in the 1950s, to being part of a company recognised globally as being at the leading edge of technology and innovation.

A former television presenter for TVNZ children’s programmes like Play School, Spot On, and New Zealand’s Funniest Home Videos, his very public life started when he joined the band Kal-Q-Lated Risk in 1967 as lead singer. After a stint in the army in the 1970’s, Taylor went on to complete an LLB degree from the University of Otago before setting up Taylormade Media, a television production company in 1989.

The following year he established Animation Research Limited, which quickly became one of the top computer animation companies in New Zealand and known internationally for its work, particularly in television advertising and sports graphics.

Its’ sports division, ‘Virtual Eye’, provides award winning graphics globally across a wide range of sports.This year marks almost 30 years since they developed the first graphics for The America’s Cup back in San Diego in 1992. In 2014 they won a prestigious Sports Emmy for “Outstanding New Approaches to Sports Coverage,” and they have been recognised by the New Zealand Hi Tech Trust with a special “Life Time Achievement Award.”

On a personal level, Taylor was inducted into the New Zealand Technology Hall of Fame in 2009[4] and was named North & South Magazines’ 2010 New Zealander of the Year.

He was awarded an Honorary Fellowship of the Institute of IT Professionals (HFIITP) in 2010 (under its former name New Zealand Computer Society), the top honour of the tech sector in New Zealand.

In the 2012 New Year Honours, Taylor was appointed a Companion of the New Zealand Order of Merit for services to television and business. In 2013, he was named Outstanding Maori Business Leader of the Year.

On 13 February 2019, Taylor was named Innovator of the Year at the annual New Zealander of the Year Awards. Awards organisers cited Taylor’s business intuition and expertise as an exemplar of innovation in New Zealand.

What fewer people may know is that it hasn’t all been plain sailing.